Words may differ or W.M.D for short, are a band formed in 2013 in the Midlands, an alternative group with blue and grungy undertones. After releasing their debut E.P “So Has The Faith” in 2015 , in mid 2017 original member and guitarist Dan Price and the band parted ways and ex White Rose guitarist Jack Revill filled the void to record the new single/ album teaser for 2018. They are now hard at work writing their debut album for a 2018 release.

2017 has seen W.M.D gigging locally and working hard to produce their new material, which will be ready for release next year, and after having seen this band play live, I have to say that its a very exciting prospect.

On arrival at The Cottage of Content, we were pleased to find a friendly atmosphere with pleasant staff. A little cold in the gig room, but things soon warmed up as more people arrived. The car park was smack on the front of the building so easy access, and I would describe the pub as no frills, but a warm and friendly atmosphere and kept clean, with a great atmosphere about the place.

Rai Kah Mercury kicked the night off. I’d never seen or heard them before but I was pleasantly surprised by these 3 lads Tomas Crean, Reece Shaefer, and Josh Lowe. They are very young and fresh on the scene, not many gigs under their belt, but they certainly pulled off a great set. They drew me in with the innocent and naïve appearance, and then socked it to me with a fantastic, fresh and captivating performance.

For anyone wanting to find out more about this band here’s an extract from the band’s facebook page. Built around the multi talented singer, song writer, guitarist Tomas Crean, whose lyrics have a poetic quality, Rai Kah Mercury displays subtlety and intensity often in one song. Influences can be traced through Free, Crazy Horse, Joy Division to Radiohead, and Black Rebel Motorcycle Club. The rhythm section of Reece Schaefer on bass, and Josh Lowe on drums empathises with the ebb and flow of Crean’s songs, in all their delicate and chaotic glory. Soulful, bluesy and downright heavy at times, when RKM lock horns into their signature jams adrenaline flows right off the stage to the audience.

I thought that Tomas Crean, although very fresh to the live music scene, was mesmerising, and with more experience under his belt, he is certainly one to watch. In fact, the whole band did a really great job of kicking this gig off, considering I was told they’ve only been gigging a few months. A big WELL DONE to you guys!

Before W.M.D took the stage, I caught up with them for a chat. You’ll find the full interview published separately. Then, without further ado, they took the stage. Playing some of the older tunes as well as their new tracks which are due for release on a double A side single, they produced a set which the audience enjoyed immensely. Their unique blend of music, took the audience on a journey through dirty, grungy rock music, with detours into blues and progressive metal encounters which went down well.

Guitarist Jack Revill demonstrated his prowess throughout the set, blasting out a strong, confident performance from start to finish.

Something about the way Jack performs sets him apart, giving an unusual edginess to the sound he produces.

Bassist Mike Wood soon got into his stride and as usual had the audience jigging along with him in no time.

He performed a great bass solo which was something a bit different too.

The thing I like about Mike is that he’s not a man of many words (not that I’ve heard anyway), but when he gets up on stage, his smile and body language tells you that he wants you to enjoy his performance. And the more you enjoy it, the more he gives!

I think there were issues with microphones throughout the night, but again, this was just a minor setback and didn’t spoil the performances in my opinion. 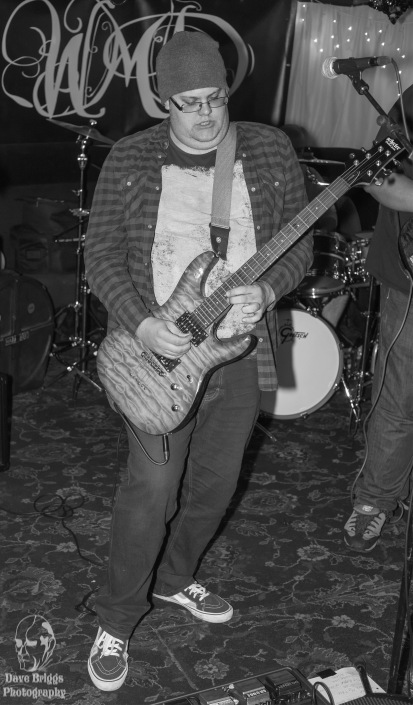 Simon Wood on guitar and lead vocals displayed confidence and great humour throughout the night, entertaining the crowd with a bit of stand up comedy as well as his brilliant vocals.

I did catch him coughing a few times during the night, but he did not let this spoil his performance at all, even when the audience beckoned for one more song at the end of the set, he came up with the goods. 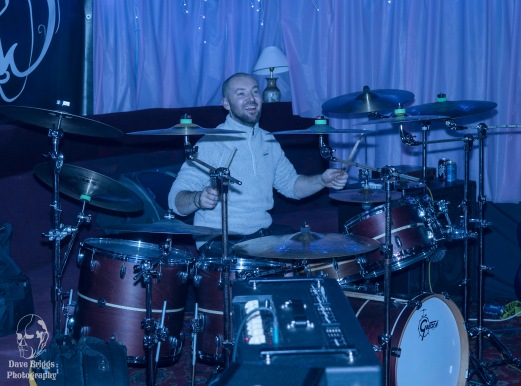 Drummer Aran Grant also put on a sturdy performance, even though it was difficult to catch him on video due to the set up of the stage. He’s as elusive on stage as I’m told he is to get to rehearsals. But the main thing is, he got there and he smashed it!

W.M.D gave a really sincere stage show, interacting with the audience making the night entertaining and memorable for all. There is an even presence from the band members, with each of them taking their turn in the spotlight. The set was given with seasoned skills and naturally effortless delivery. You can’t help but warm to them and there’s a genuine appreciation from the guys.

Having had the opportunity to review the new double A side single ‘Stepping Stone’, I have to say these guys are awesome. I found the digital versions of both tracks a real testament to the abilities W.M.D possess, and the tracks are worlds apart from each other, giving an extra flavour to the release, however, I loved the live performances too. Please take the time to check out the videos, the new releases are in there somewhere!

If you like what you’ve heard about W.M.D why not follow them on facebook or twitter
I am hoping that I will get the opportunity to meet with W.M.D again prior to the release of their album in 2018, and I’m sure this will knock your socks off!

*** Sincere apologies for any video/picture quality. The venue is fantastic to hold live events, however the lighting is not kind to the camera!***

Deb with Theia at The Giffard Arms 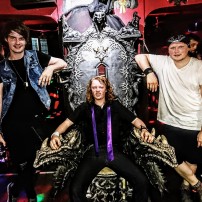 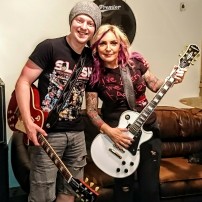